Last week, my friend Mark and I completed what I’m calling “The Great Dingleberry 2021”. This was a 4-day road trip where we travelled close to 800 miles across dirt, gravel and paved roads in Southern Washington and Eastern Oregon. Our intent initially was to travel as far along the Washington Backcountry Discovery Route (WABDR) as we could, but the late season weather forced us to abandon that route and travel part of the Oregon Outback instead. We were not disappointed and enjoyed our time seeing some lesser known (and travelled) areas of the states we live in. We also achieved our goals of reconnecting post-COVID and getting some miles on our trucks, which had both been worked on extensively earlier this year. Our goal for Day 1 was to meet at Bridge of the Gods in Oregon and to travel together from there to our 1st night campsite, somewhere in the Gifford Pinchot National Forest. The road down from Seattle was tough, with heavy rain and winds all the way to the Columbia Gorge. Ironically, once in the gorge, known for some of the strongest winds anywhere, the weather calmed down and it was smooth sailing to the town of Cascade Locks. We met literally under the Bridge of the Gods, which provided us much appreciated shelter from the light rain that was falling, shot the breeze for a few minutes and then got started on the actual WABDR. 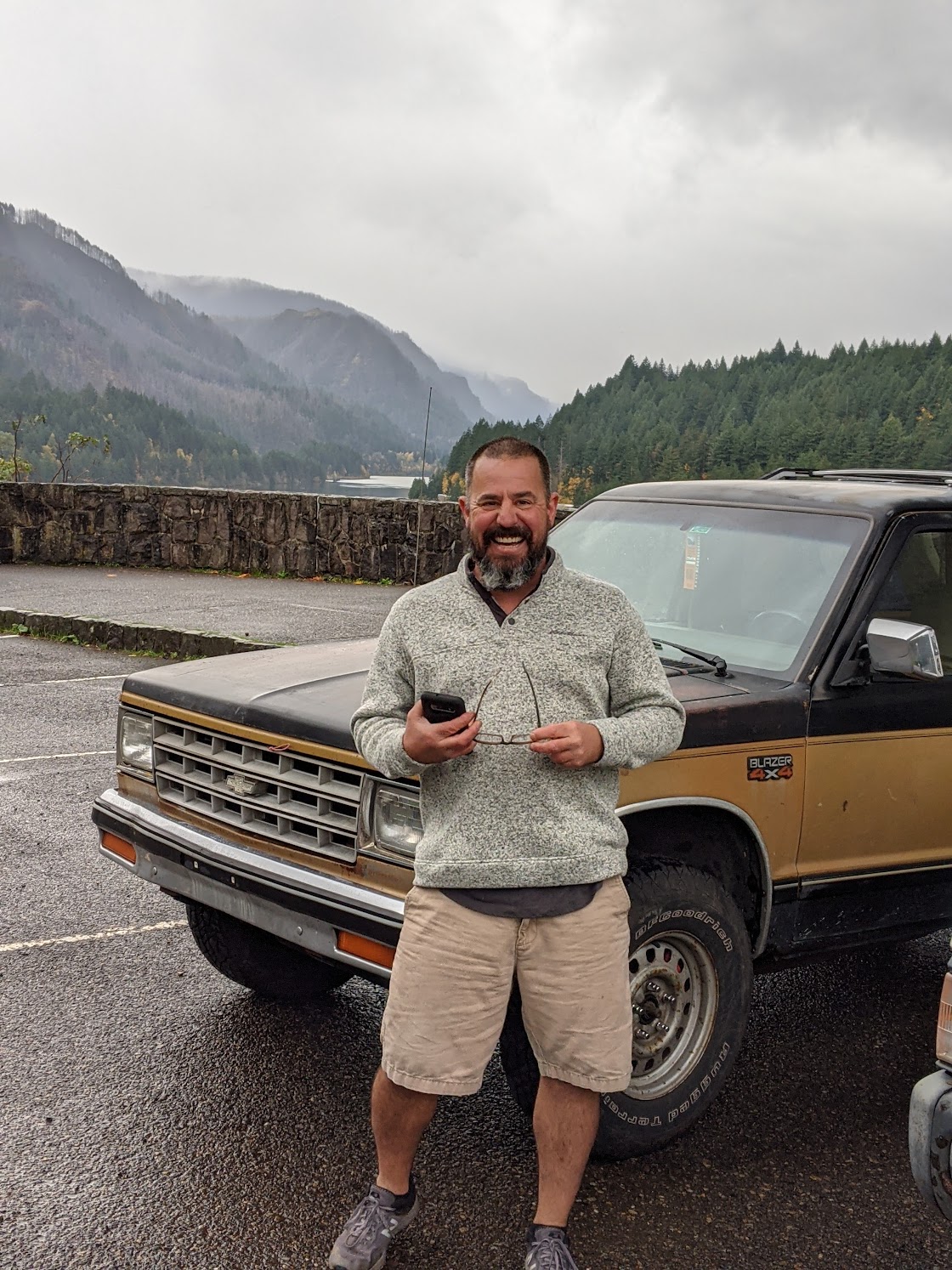 After a quick, 20 min drive in light rain to Carson, WA, we turned off onto Forest Service Rd 6808 and began the dirt road portion of the day. This road was extrememly smooth and well maintained and we made good time. Our goal was to find a place to setup camp before it got dark and after checking out a couple spur roads that didn’t pan out, we found a nice dispersed campsite about 10 miles down the road just off the intersection with FSR 018. By 3:30 we were getting camp setup.

Night 1’s camp preparations felt a bit challenging, as it was the 1st time using all our gear, dusk came very quickly and the temperature dropped into the 30’s with a mix of rain and snow that went on through the night. Overall though, it turned out great. Mark had brought a classic Coleman propane lantern, I had a fancy Biolite fire pit and along with some homemade spaghetti and beer, we ended up having a great evening. 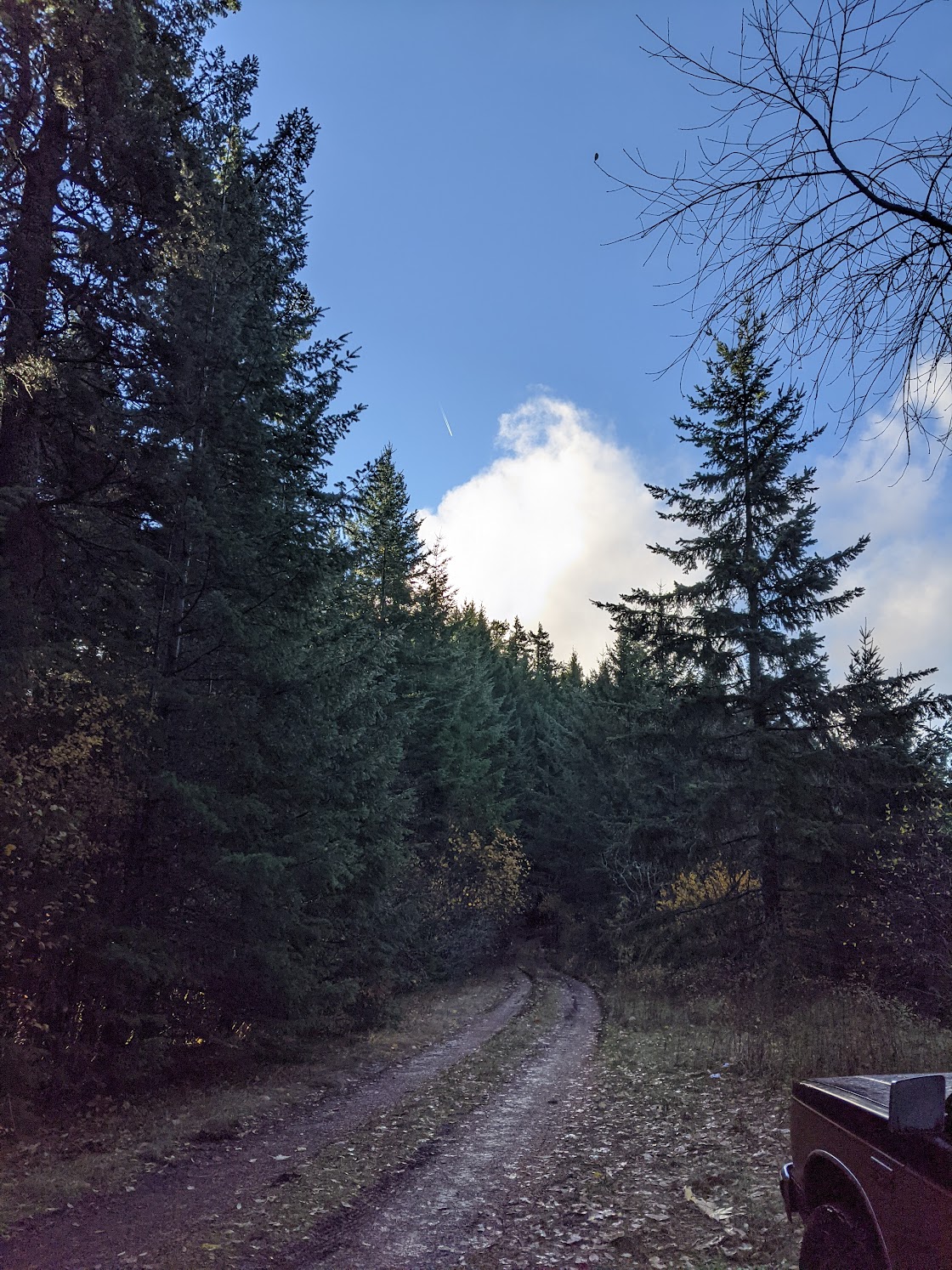 We started the day shortly after first light with the simple goal of getting some coffee made. I think we’d both had a bit of a cold night, due in part to having waited until after we turned in to setup our beds inside the trucks. The results were a bit half-assed and I remember us both agreeing in the morning that the following night, we would take care of it 1st thing, before starting food prep. I then discovered to my horror that I had forgotten a key piece of camp equipment that prevented me from being able to make coffee. Fortunately, Mark had his coffee press and once I was able to get my old camp stove working, we got hot water in short order and coffee flowing in our veins.

A bit of a note on stoves and hot water. Mark had one of those butane camp stoves that setup very quickly and was rock solid for reliability. However, it took FOREVER for it to heat anything up. We did notice later that replacing the butane cylinder had a great impact on it’s performance, but it was still slow. On the other hand, my old dual fuel stove was the biggest pain in the ass on the planet to get started, but once it was going, it did a pretty fast job of getting stuff hot. Definitely this is an area of our gear that we’ll be digging into more before our next trip. After some coffee and a rudimentary breakfast, we packed up and headed out. The weather was sunny and clear and we were excited to see how far we could get up the WABDR. As it turns out, all of about 20 miles. The roads were generally good as we drove north from our campsite, but definitely wet, with mortar blast sized holes that felt like stream crossings when we drove through them. None were deeper than 10-12 inches though and since the road bed was a nice gravel base, we had no problems. 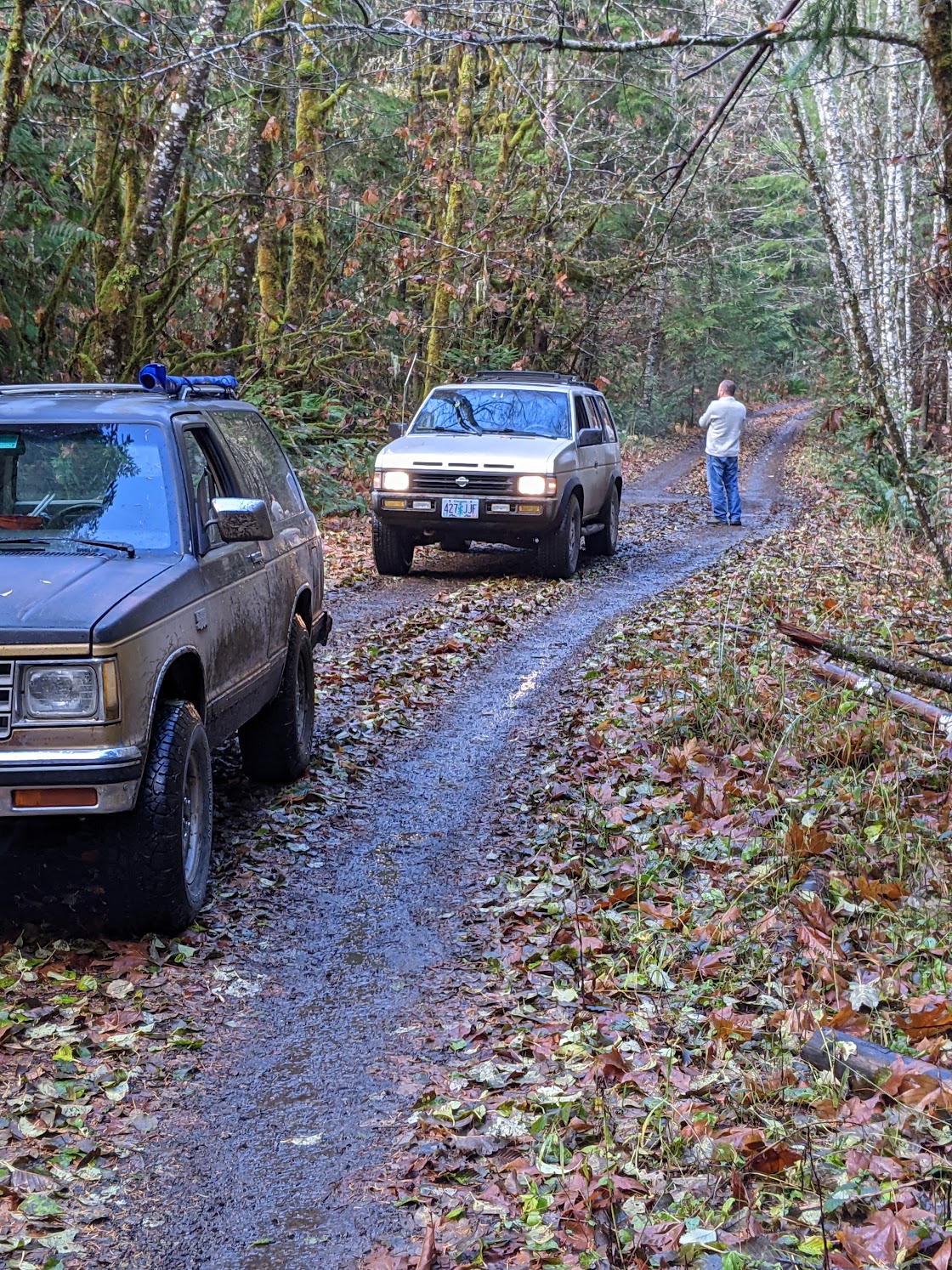 On the climb out of the Lusk Creek valley, along Forest Road 86, we started to see light snow on the shaded, north facing side of the road. Gradually, the snow got more persistent and as we snaked up towards Trail Peak, the road also got a bit steeper and more rutted. Eventually, at around 3700 ft in elevation, roughly 1/2 mile from Trail Peak, the snow was about 2 inches deep and the road became more muddy. We were still doing fine, aside from an occasional slight loss of traction, but we decided that was far enough. We had agreed beforehand that we didn’t have the right running gear to be in snow and that we weren’t interested in testing the trucks in that fashion. Also, we knew the road would keep climbing eventually and we were in a good spot to turn around. So we did! 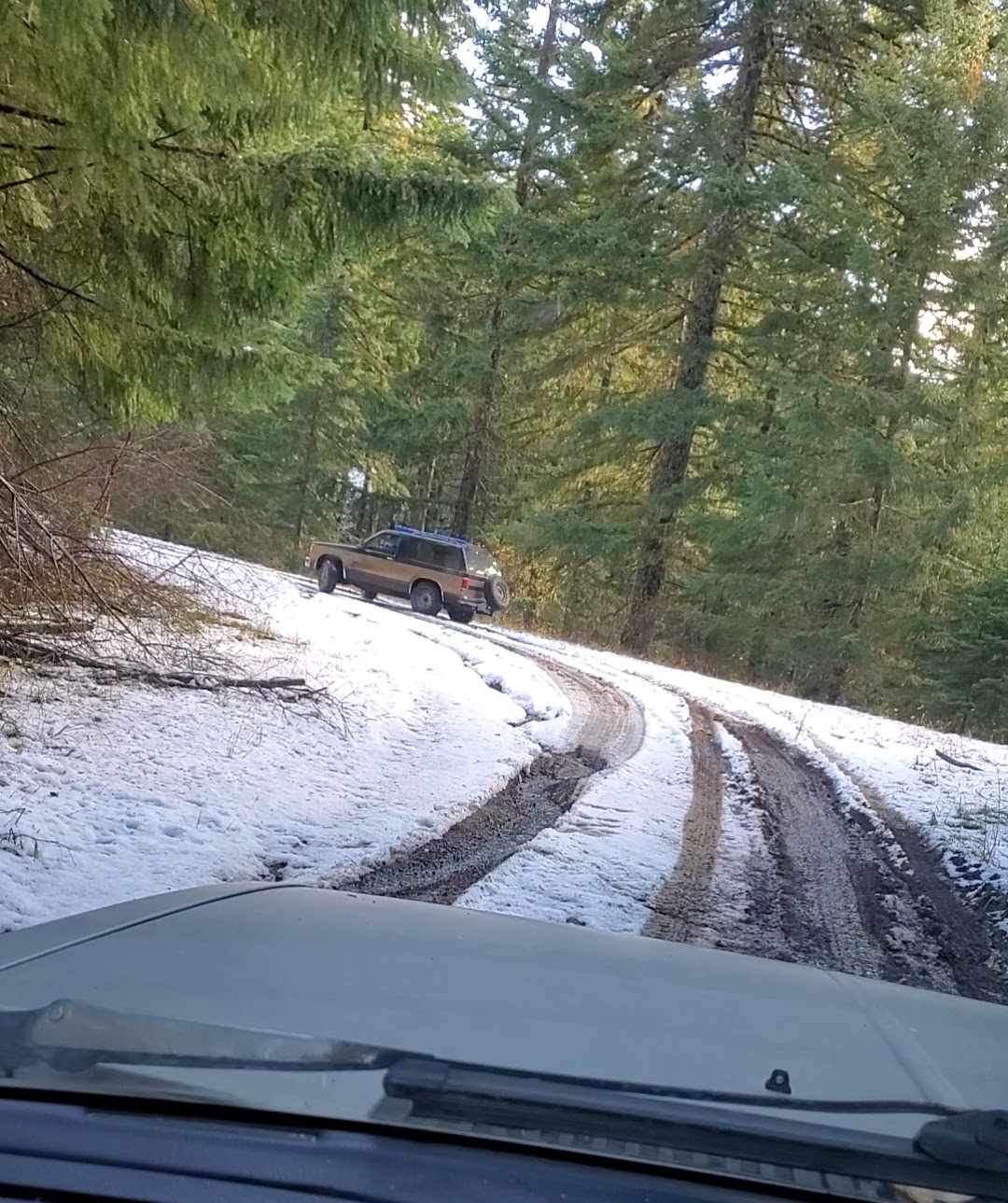 The rest of the day was spent bombing 170 miles South, mostly on gravel roads, to the Ochoco National Forest in Oregon. The weather was beautiful and sunny, which was a real treat, but the short day length meant that we didn’t get to our Day 2 camp until well after dark. We wanted to stop sooner, but there were zero public lands to camp in along the entire length of Hwy 97, from the Columbia River, all the way to where we eventually stopped. This surprised me, as we were essentially following the Oregon Outback, a well known bike packing route. Still, the campsite we eventually stopped in once we got to the Ochoco, was fantastic. Located by the Potlid North Trailhed, in a clearing surrounded by Ponderosa Pines, it had a stone fire ring and plenty of space for us to get off the road and park the trucks. We promptly got our bedding figured out for the night, cooked a quick meal of campsite burritos and called it a day.

A warm front blew threw during the night, bringing with it intense rain and high winds which beat on the trucks like a drum. The result was a fitful night’s sleep, but by 4 AM the winds died down and I fell back asleep until nearly 8. Woke up to a relatively clear morning and were on the road towards Prineville, OR by 10 AM. We had assumed there would be a few more miles of dirt roads, but in almost no time we were back on asphalt. Unfortunately the return of a smooth surface brought to Mark’s attention a new whine from the Pottyfinder’s transfer case. We took a few minutes to try and figure out what it was, but the sound was subtle and wasn’t accompanied by any mechanical failure. It did add an element of unease for him though and I could see him relax the further West, and closer to his AAA service area, that we drove.

Prineville was cute, but we pretty much only saw a gas station and the local Mexican Restaurant’s handy parking lot before heading West to our next stop, the Deschutes National Forest. Located just West of Sisters, OR, the DNF is criss-crossed with jeep trails that snake through a Lodgepole Pine forest. Very pretty, but it was starting to snow, sideways, when we arrived. We spent a good bit of time driving around, looking for a place to camp that was in a natural wind break. We found a spot that worked out alright and then spent a couple hours screwing around before focusing on dinner. Mark made an amazing chicken and rice concoction that warmed us up nicely and by 8 or 9 PM the wind and snow completely died off. The night was cold and clear and the stars were amazing at 3 AM, but the 27 deg temp was definitely bracing. I woke up with an ice layer on the inside of the Blazer, but was cozy in my 30 deg bag. 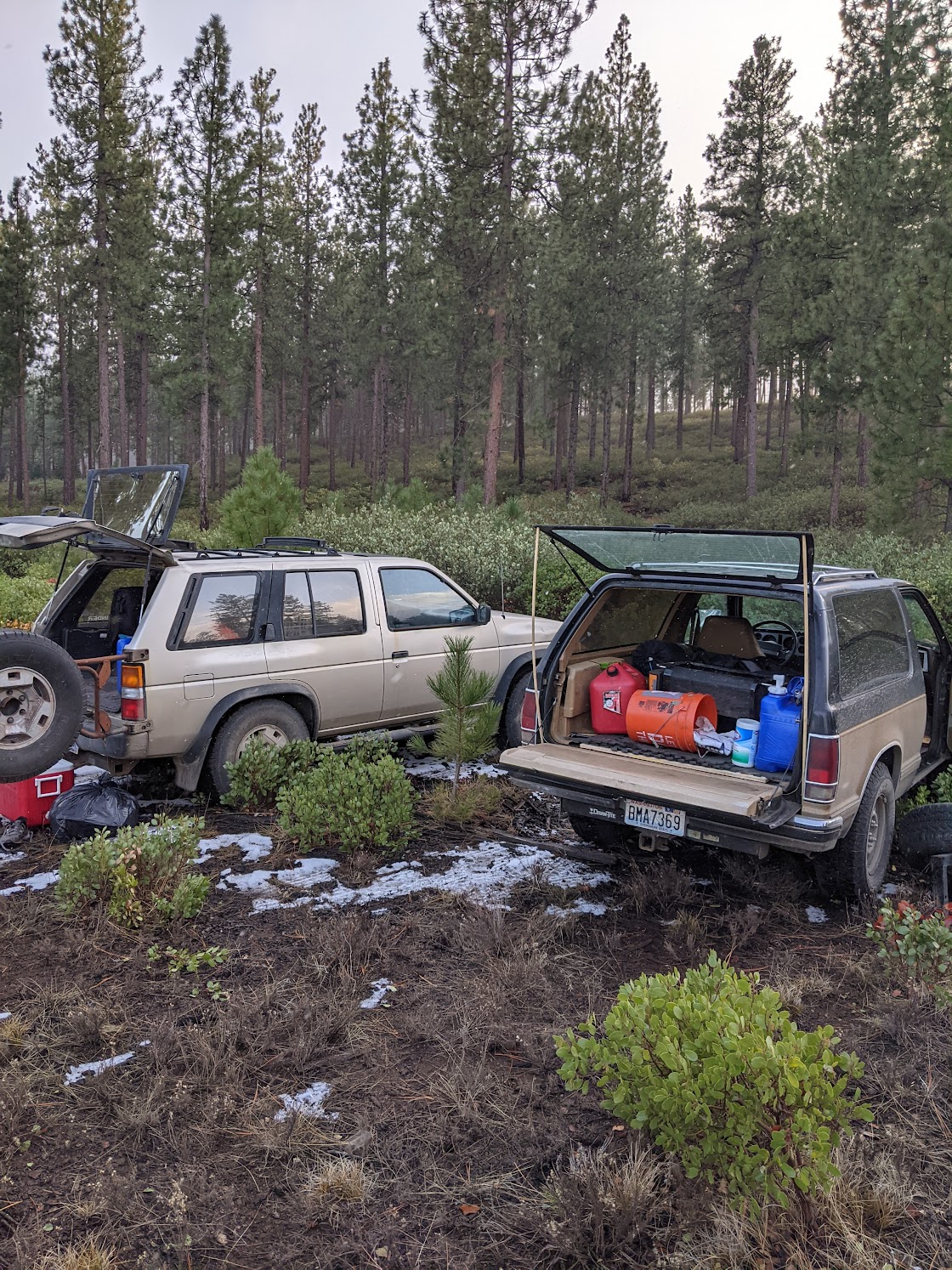 Day 4 was all about getting home for both of us. I drove 340 miles from Sisters to Seattle with no mechanical problems, which made me really happy. Got home around 6 PM and considered the trip to be a complete success. We’ve already started planning our revenge on the WABDR, for sometime in late June, early July of 2022. I’m looking forward to it!